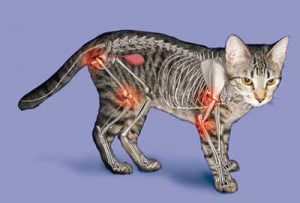 In recent years we have discovered that arthritis, and the pain it can cause, is much more common in cats than we thought previously. We’ve long known that people and dogs suffer from joint pain and osteoarthritis, but we did not know as much about cats and how they are affected by this syndrome.

Remarkably, one study in cats aged 12 and over showed a full 90% have degenerative joint disease changes on x-rays, including the spine and limb joints. A more recent study of cats of all ages revealed over 60% of cats show radiographic evidence of arthritis in limb joints (elbows, knees, etc.). Overall, the recent studies have made it clear that arthritis and degenerative joint disease is far more common in cats than we realized, and it’s not just the geriatric cats that are affected. The joints most often involved include the shoulders, hips, elbows, knees and ankles as well as the spine. 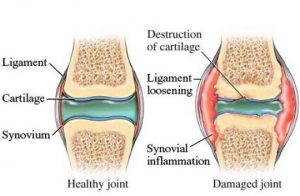 Osteoarthritis describes a degenerative process occurring within the joint that involves the loss of the healthy cartilage that helps cushion the joint and provide a smooth contact surface. The degenerative process is actually quite complicated and can be the result of excessive mechanical “wear and tear”, poor joint conformation causing abnormal contact and immune related processes like rheumatoid arthritis in humans. While it’s not entirely clear which of these factors is most common in cats, that they suffer significant degenerative changes in their joints is no longer debatable.

Cats are amazing creatures and one of their skills is hiding discomfort and pain. This is unfortunate because it can make it much more difficult to recognize that they are suffering from arthritis pain. Unless the pain is acute or quite severe, they are usually not obviously limping. Many owners think they are just getting older as their symptoms may look like simple aging and may not be obviously due to pain. Cats tend to restrict their activity to minimize the use of their sore joints where a dog would more likely go on and chase the Frisbee over and over and have an obvious limp the next morning.

Major signs of arthritis in cats include: 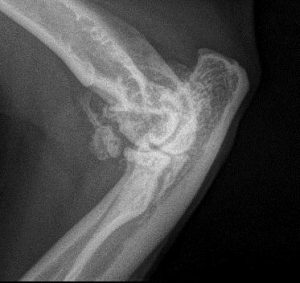 Diagnosing arthritis in cats is fairly straight-forward. Cats showing any of the symptoms above should have a veterinary examination, especially if they are seven years or older. X-rays of the joints that seem suspicious will help clarify if arthritis is indeed the cause of discomfort. While lab tests will not diagnose arthritis, they will often indicate if the cat is having other problems related to aging and determine if they appear healthy otherwise and are able to safely take certain medications for their arthritis pain.

Please see Part II of this series for information on how the pain and discomfort of osteoarthritis can be managed to improve the quality of life for the many affected cats.

Font Resize
Contrast
Accessibility by WAH
Call Us Text Us